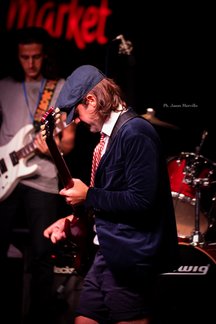 I’m Jacopo, lead guitarist (Angus Young) of HTH.
Music has always been part of my life but in 2016 I started playing guitar.
The world of rock is what I'm most passionate about and in particular AC/DC have always been my favorite band.
Their simple but edgy riffs immediately captured me, that is why I strongly wanted to find and form a tribute band in their honor.
The rock of AC/DC is based on the blues technique, in fact I began to study with great care the best-known artists of this genre including B.B. and Albert King, up to the immense Stevie Ray Vaughan.
As a guitarist, my first goal was to learn the most iconic songs of world blues rock, self-taught and reproducing both rhythm and solo parts by ear.
The first musical experiences were in the streets and squares of Milan, in fact my beginnings correspond with busking on the road, an excellent gym to start relating with the public during my performances.
In my musical career after a period of self-taught I have perfected my studies with the lessons and advice of a teacher.
After a few years I felt the need to share these strong emotions with other musicians, this is where the AC/DC HTH tribute project was born.
After the first rehearsals, an accurate search for components began to faithfully reproduce the show of the Australian band.
Almost three years have passed since the beginning but the desire to play their music in clubs or on stage has grown more and more.

The perfect balance has now been achieved. Sound, power, fun and madness are the ingredients that characterize our lives, a mix that should be savored at least once.