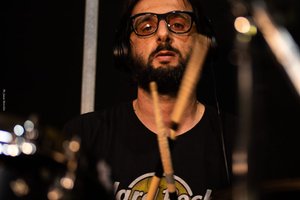 My (artistic) name is Sammy, I come from Messina, but I have been Milanese by adoption for 15 years now.

I started to love Rock when I listened to an audio cassette of Motley Crue (Girls Girls Girls) for the first time and from there a world of dreams opened up, in fact I left the band of my country where I played the trumpet :-)
I started playing drums at the age of 17, for four years I played in a band that musically followed the grunge trend of the Nineties (Soundgarden, Pearl Jam, Alice in Chains, Nirvana).
Original songs and covers by Seattle bands were part of our repertoire. After that constructive and formative experience, I joined another band with a repertoire of original songs and covers, with which I participated in the "Accademia di Sanremo" and "Sanremo Rock".

The drummer model who guided and influenced me in the early years was undoubtedly Nicko McBrain of Iron Maiden, a unique musician and a very nice person.

After a short musical break, I arrived in Milan in 2006 and enrolled in the Rock Tv School, following the lessons with Mario Riso (R.A.T. Grignani, Rezophonic) and then Federico Paulovich (Destrage). This experience allowed me to seriously study the instrument, attending clinics and seminars of the most important Italian and foreign drummers.

The Rock Tv School Band of which I was a member, also performed at the opening of established bands of the Italian rock scene (Extrema, Marta sui tubi, Rezophonic, Vallanzaska etc...).

In the meantime, however, my musical references change, I listen to a bit of everything and in particular I start studying the styles of other drummers: Vinnie Colaiutta, Dave Weckl, absolute sacred monsters of the instrument, Chad Smith (RHCP) Gavin Harrison (Porcupine Tree), Ray Luzier (Korn).

In Milan I was part of many bands, grunge, hard rock, britpop, some songwriters, performing with them in many clubs and events, thus significantly increasing the baggage of musical knowledge.
I definitely make the leap in quality by joining in 2013 a pop-swing band with a retro sound that stood out for its fast-paced shows full of colors, smiles and surprises.

With "La Banda del Pozzo" I shoot some videos and we became a reference band in Milan and well known in the musical circles of the city. One piece in particular was produced by Francesco Sarcina (Le Vibrazioni). For three years I had been touring Italy on various tours and at the moment it remains my best experience to remember.

After another short break, the circle closes and I return to my first love, I dive headlong into the Highway To Hell project and have been part of the band for three years.
ROCK NEVER DIE !!!